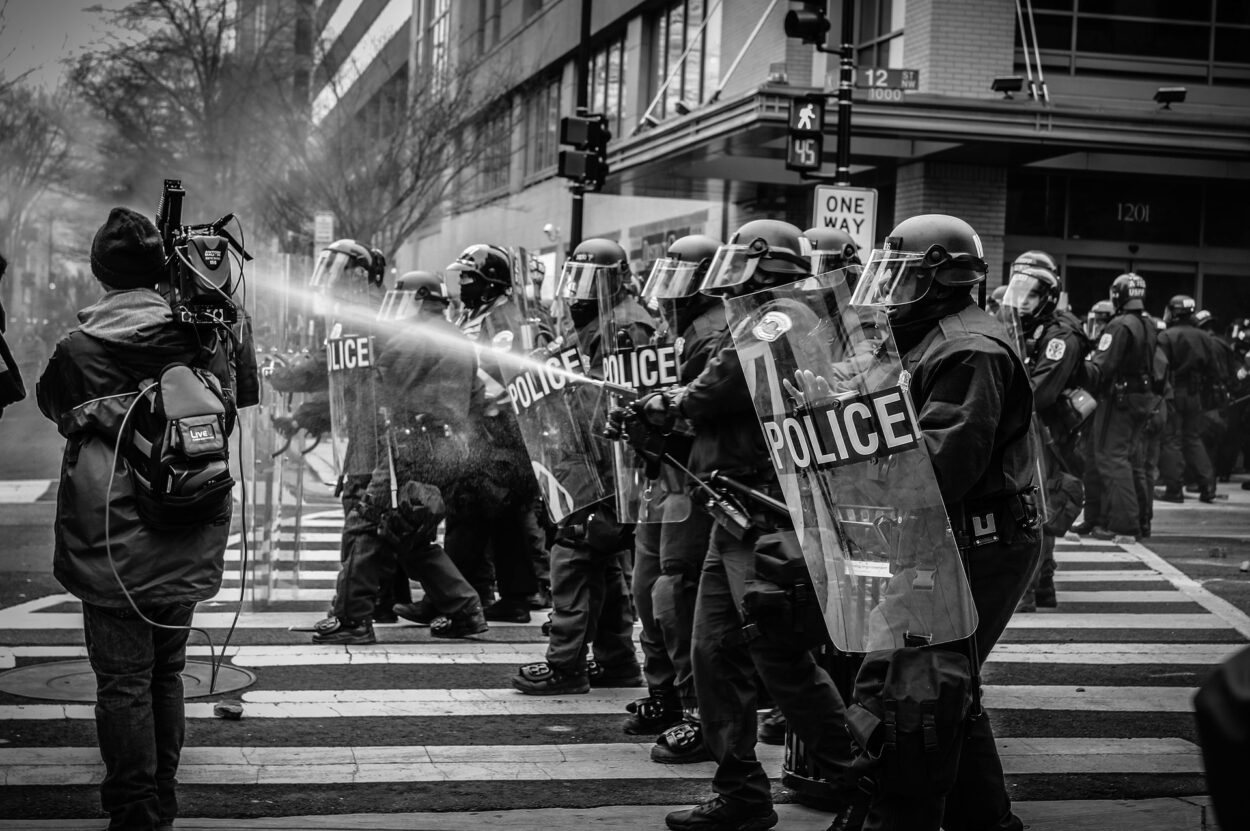 The relentless 24 hour news cycle is hinged around profit, suffers from misinformation and paints a less-than-ideal picture of society. And, too many of us buy into it.

Up until about 5 years ago, I used to buy into it too.

In fact, I was glued to one of the major news outlets. It was controlling my life, and definitely not for the better.

I made myself believe that I was “staying informed” and it was my responsibility to know what was going on around me.

I told myself that I was helping society by staying up on the 24 hour news cycle, casting well-informed votes, and making intelligent decisions.

But, I slowly began to realize a giant flaw in my assumption. I wasn’t staying informed at all. I wasn’t helping society a bit, and it damn well wasn’t improving my overall happiness.

Instead, I was letting myself fall victim to information warfare, designed – not just reported, by hugely-profitable entities with a direct and verifiable interest in keeping me tuned in.

The fact is the news cycle was controlling my life, and it was a spiral that I finally decided to escape from.

How the 24 Hour News Cycle Controls Us

Despite what highly-paid pundits and commentators might have you believe, the 24 hour news cycle isn’t a public service. It is not here to serve you, keep you informed, or make you a more educated person.

24 hour news is a business, and like any business, the primary purpose is to make money. And, lots of it.

Case in point: Former Fox News television host Bill O’Reilly earned $25 million a year by the end of his stint on television and has an estimated $85 million net worth.

According to reports, CNN reporter Anderson Cooper’s estimated net worth is around $100 million, and earns $12 million.

And, these two guys aren’t the only highly-paid news anchors in the business. Far from it.

News is a business, and like any business, the goal is to make money. And for most networks, ad revenue is the primary source of income.

How much do these news channels earn? Fox News is projected to rack in over $1.3 billion in advertising in 2020. CNN’s anticipated 2020 ad revenue is around $773 million.

In other words, 24 hour news is a highly profitable business, and advertisers pay big money to get their ads in front of viewers. And, this is where the rubber meets the road.

The 24 hour news cycle has a vested interest in keeping the people watching for as long as possible, and they do this through a variety of carefully crafted broadcasting techniques.

The problem is these techniques are controlling our lives.

Let’s take a quick look at each of these facets of why 24 hour news is so tricky, and why many of us are glued to its vicious cycle.

“Television news stories tend to be structured to resemble drama or, more specifically, melodrama,” writes Michael Milburn and Anne McGrail in a study published way back in 1992. Even 28 years ago, news networks crafted news stories to make viewers think they are watching a movie.

And, according to the study, the dramatic presentation of 24 hour news reduces what they call “cognitive complexity”, which is a psychologist’s way of describing how intelligently we process information.

We remember and think about the news less when it is dramatized, instead focusing almost entirely on the entertainment value of what we’re watching and our emotional response to it – as if the news was manufactured straight out of Universal Studios.

We don’t question. We aren’t skeptical.

The fact is most of us want something interesting. Entertaining. Something that will hold our interest.

We won’t watch the news if it’s boring.

Apparently, it wasn’t so dramatic after all.

By definition, 24-hour news is reactive. We don’t see many news reports “live on the scene” of a perfectly tranquil public park with kids playing and dogs running and everyone having a good time.

News networks report on things that happen, and they are generally negative. Wars. Tragedies. Terrorism. Oppression.

Unfortunately, that’s the stuff that sells. Believe it or not, we pay more attention to negative news than we do its positive counterpart.

And, the very nature of news has an extremely negative affect on viewers because it paints a dark and pessimistic picture of society and we overestimate its impact and significance.

“[our brains] may be more likely to remember horrible events and then believe that these relatively infrequent occurrences actually represent the general state of things.” writes Psychology Today.

The Guardian weighed in on this problem, too.

“Heavy newswatchers can become miscalibrated,” they said. “They worry more about crime, even when rates are falling, and sometimes they part company with reality altogether.”

And, we begin worrying about things – such as the coronavirus outbreak that has most newswatchers in a tizzy even though fear over the virus is spreading significantly faster than the virus itself.

Where’s the outcry over the flu?

The coronavirus is big news because it keeps people tuning back to the news to see where that monster has spread. How many have died. Where it’s heading next and in what direction we should run like hell.

“Plane crashes always make the news, but car crashes, which kill far more people, almost never do. Not surprisingly, many people have a fear of flying, but almost no one has a fear of driving,” wrote The Guardian.

The news has more of an impact on most people’s perception of the world than we probably realize.

It’s human nature to form connections with other people, and this extends beyond friends and family.

We instinctively watch movies with our favorite actors, carve out time to take in our favorite TV show and listen to our favorite speakers, podcast hosts, politicians and other public figures.

And, 24 hour news networks know this.

It’s no surprise that popular news anchors like Sean Hannity and Diane Sawyer get paid 10s of millions a year. They keep viewers tuning in at all times of the year, regardless of what’s happening in the world. Slow news day or not, a lot of us still watch.

And, we like to see pretty people. We may not realize it, but we like it. Our brains crave it. The truth is most of us would rather our dentist have perfectly manicured teeth, a good posture and impeccable smile. Our doctor to have broad and wide shoulders and a chiseled physique, or a slim, shapely figure.

Attractive people can spur on a dopamine release within our brains, and that’s the chemical most responsible for making us feel…good. Happy.

The gallon of make-up that women (and men!) news anchors wear keep us feeling good because we’re watching people we find to be pretty and/or handsome. They are well-groomed. Perfect hair and a precisely-tied tie. Professional. Well lighted in the studio.

Like movie stars, well-manicured 24 hour news personalities keep a lot of us coming back for more. Because we like what we see.

You might be surprised at how much of the news that you watch is just downright inaccurate, misleading or false.

Inaccurate news happens all the time, but retractions – when networks actually admit to mistakes, almost never make the news.

It happens to Fox News. It happens to CNN. Biases and agendas regularly permeate news networks. And, this happens all over the place – including social media where fake or inaccurate news is disseminated in lightning-fast speed.

In their never-ending rush to be the first to report, 24 hour news outlets prioritize speed over authenticity. Why? Because being the first is a leg up. It keeps viewers watching and advertisers paying.

Fake news spreads faster than the coronavirus! Actually, much more so.

How to Watch The News

Make no mistake – watching the news isn’t necessarily bad. Staying informed and getting involved can be healthy, productive and motivational for a lot of people – so long as we take care of ourselves first and understand that news is just another business.

The trick is to avoid letting the 24 hour news cycle take over your damn life.

And, the trick is also to resist being duped by inaccuracies and letting your perception of the world around you be governed by a medium that survives based almost entirely on negativity, sensationalism and drama.

Here are three keys to watching the news in a productive way that actually improves your life.

Don’t watch so much of it

As I said earlier, I used to be glued to the 24 hour news cycle. I’d have one of the major news outlets on virtually all day – as background noise, but with one ear listening at all times.

The barrage of relentless negativity was slowly creeping into my life, and the more I watched, the worse it got.

It was never-ending and I had no idea what that constant negative influence was doing to my life. I was often frustrated. My blood pressure would rise whenever politics was the topic. Often, I would stop whatever I was doing and listen. Watch. Get angry.

The first step to avoiding letting the 24 hour news cycle take over your life is to stop watching so much of it.

Now, we don’t even have cable television, and I’m a far happier person. I miss nothing about the news cycle or news channels.

Miraculously, the information that I truly need to have somehow makes its way to me. Every time.

While far from perfect, your nightly local news report will likely provide you with more actionable intel. Information that can impact your life in a positive way.

This type of news is much more informative than the 24 hour news cycle.

And, local news tends to be less sensationalized and dramatic because your local affiliates don’t need to fill 24 hours a day with news content. Most local television stations broadcast the news in the morning, at noon and then again in the evening.

A few hours a day. So, they have the luxury of picking and choosing what they believe the local community will care about most.

Note that some of your local news is syndicated from national news outlets and there is no avoiding sensationalized news altogether. But, your local news will provide you with information that’s directly applicable to your life in your local community and might be a better use of your precious time.

Be skeptical of everything

Being skeptical is one of the healthiest ways to keep yourself from falling victim to biases and emotional reactions. Whether you’re watching local news or national, always keep your guard up.

The fact is news isn’t always news. It’s not always accurate and the news business is just that – a business. News outlets are there to make money, not necessarily to serve you or to keep you informed.

Never take news at face value. Instead, use your head and consider the facts. Do your own research.

Skepticism is akin to “trust but verify”. It involves a careful consideration of the information you’re given and matching that up against your own research and observations.

And, being skeptical has never been more important than when you’re watching the news.

Are you a 24 hour news junky? How do you keep the news cycle from controlling your life?